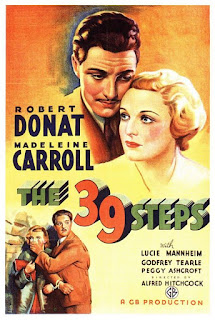 Alfred Hitchcock looms formidably over modern cinema to the point that undertaking the examination of his work can be a daunting endeavor. But it is worth remembering that one of the key reasons his work has retained its importance for so long is because it’s so damned enjoyable to watch.

What makes it amazing is that you can start from there and go just about any direction you want because he’s taken such meticulous care in crafting the thing that it’s packed full of meaning waiting to be unleashed to the curious observer. But that’s certainly not a necessary requirement when you sit down to get started.

The 39 Steps is seen as the high-water mark of the famed director’s stretch working for UK film companies. This span of twelve years was less a period of apprenticeship than a honing of the skills he would then explore to their extremes over the rest of his career. It would be the genesis of Hitchcock's genius as the pre-eminent auteur.

The base clay for his tableau was a tale penned in 1915 by Scottish author John Buchan who called it a “shocker” which he defined as a “romance where the incidents defy the probabilities, and march just inside the borders of the possible.” And that’s about all Hitchcock felt the need to preserve for his cinematic version.

Buchan’s Richard Hannay is a well-to-do Scotsman living in leisure in London. He takes off on the adventure out of boredom as much as anything else and most of the action requires him switching disguises to evade capture by the spies. The murder in his apartment has set the police upon him but that plot is unceremoniously dropped about two-thirds of the way in.

Robert Donat’s Hannay fits the Hictchockian hero mold quite well. He’s delightfully oblivious to his peril at first and, even when the enormity of his plight has made him desperate, there’s a befuddled charm to his demeanor.

Hannay is clearly a casual womanizer. Given the offer to take an anonymous woman home with him he doesn’t struggle too long over the moral peculiarities of the situation.
Eventually, he does get Smith into his bed, just not in the manner he intended.

But his home is empty as his life is empty. White sheets cover the furniture in his apartment and it doesn’t seem to bother him too much. There is no-one he is answerable to but there is also nothing anchoring him as well. But he will be caught in chains soon enough.

Hitchcock hints at this idea of his protagonist becoming attached to a woman from the start. Although Hannay’s relationship with Smith is the epitome of a one-night-stand there is a clear visual clue of something more. When Hannay takes the map from the woman’s hand it suggests the linked wrists that will occur later. A missed opportunity, perhaps?

Donat’s interaction with Madeleine Carroll is as close to slapstick as Hitchcock ever allowed and, even at this case, it’s to hone in on the sexual tension that ripples beneath the surface of the entire film. Carroll is superb as a woman dead set against this man she’s been shackled to but who learns to listen to her own intuition about him.

Their attempt to obtain a room at a hotel while handcuffed together focuses almost completely on the sexual tension between them. His pleading has so far put her off but his forcing himself on her has clearly raised her passions (although not her sympathies). A good bit of this sequence is played as jest but Hitchcock’s camera makes sure danger of the sexual overtones is there as well.

When Pamela tries to remove her stockings Donat chipperly offers to help and is turned down, ostensibly in jest but, one suspects, not completely. Hitchcock includes the viewer is included in the tension by holding his camera on her legs much longer than necessary to underscore the point of how clumsy it is to do handcuffed to another man.

Hitchcock is essentially using the voyeuristic aspect of the medium to suggest the emotional state of his characters. The observer – although outside of the action – shares the experience through the medium of the camera.

His lewdness would be almost shocking if it weren’t so tongue in cheek. His sexual connotations start off as a sort of running in-joke but become so commonplace they raise more disconcerting questions about the character’s sexuality and the conflicting moral standards we hold toward sex in general.

Yet, when he’s in the Scottish cabin, the situation changes completely. The farmer accuses him of trying to sleep with his wife. Hannay, in desperation, tells the truth – he’s an accused murderer – and suddenly the farmer’s disposition changes. In this case adultery is grounds for punishment but murder, that’s negotiable.

No less than François Truffaut observed this strange dichotomy and Hitchcock’s masterly ability to weave them together into a cogent whole in The 39 Steps.

"It was impossible not to see that the love scenes were filmed like murder scenes, and the murder scenes like love scenes...It occurred to me that in Hitchcock's cinema...to make love and to die are one and the same."